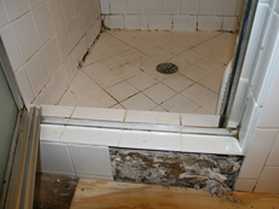 Dear Cedric,
Mold has been gaining increasing recognition over the past few years as the source of respiratory and serious health problems. In most cases, the problem is just out of sight and growing behind our walls. Statistics show that 80% of the showers that are constructed today, with the old method of rubber shower pans and backer board, FAIL within the first year.
Approximately 27 gallons of water are used per single shower use. The average shower gets the equivalent in rainfall as 11 tropical rain forests, 30 times the rain fall of Seattle, for a total of 1,100 inches per year. Over time, the morter pack which is poured on the floor of the shower becomes a cesspool of human waste and organisms. Moisture, steam and vapor pass through the walls and condenses on the back side of the walls at the bottom of the studs. Mold spores start to form at the base of the shower behind the walls. Hold on....there is a solution! 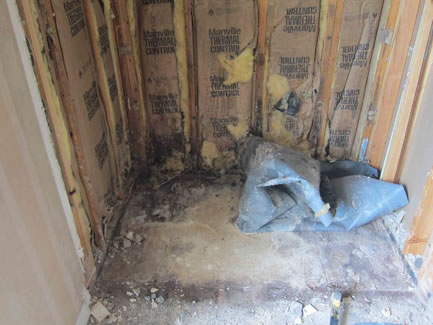 Typical shower or tub removal
In this 10 yr. old shower, mold was found half way up the studs, decomposing the footer and plywood subfloor. A sizable hole was found in the left corner exposing the ceiling of the first floor. From the original installation, nails pierced the rubber pan at the base of the backer board and curb. 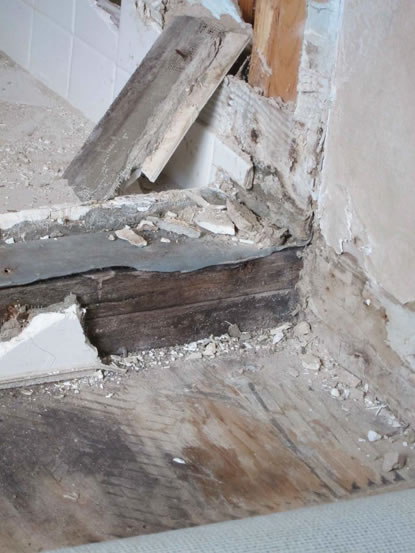 Curb removal with rubber pan
A breach in the water proofing caused damage to the drywall adjacent to the curb. The floor tile broke free from the plywood subfloor due to the expansion of the subfloor and water saturation. Uncoupled membrane was never installed as a barrier between the tile and the subfloor which would have allowed for movement.

Schluter board, shower pan and curb installation complete
Orange is GOOD!!! This shower has been rebuilt with Schluter Kerdi board. The surface has a polypropylene fleece to completely block all moisture and vapor from penetrating the walls. The seams and fasteners are sealed with Kerdi band. The curb and drain are prefabricated components that are available in various sizes to fit any custom shower design. 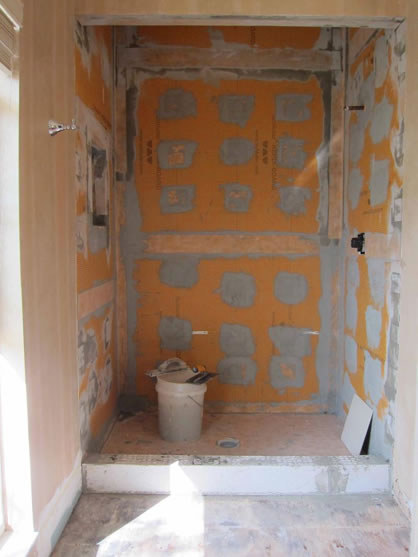 Schluter has been in existence for over 25 yrs, mainly used in Europe. In this type of shower build, all of the areas are water and vapor proofed from the surface rather than just the bottom. At this point, one could take a shower prior to the installing the tile and the shower is completely water and vapor proof. This same process is also used for commercial and residential steam showers which has proven to be a much harsher environment. This shower is ready for tile!